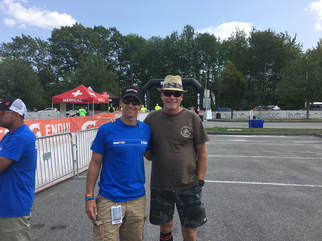 Jay Peluso, a two-time All-American swimmer, hails from Cumberland, RI and is the founder of Peluso Open Water. He graduated from UMass with a degree in Sports Management where he was a seven time New England Swimming Champion and a starter on the 1993 New England Champion water polo squad. He earned his law degree from the University of Richmond in 1996 and was inducted into the RI Aquatics Hall of Fame in 2004.  Coach Jay’s triathlon and open water career highlights include being a five-time member of USAT’s Age Group World Championship team and a second place finish at the USMS 2-Mile Cable Swim National Championships. Ed worked with Jay to tweak his pre-season bike fit in 2017. 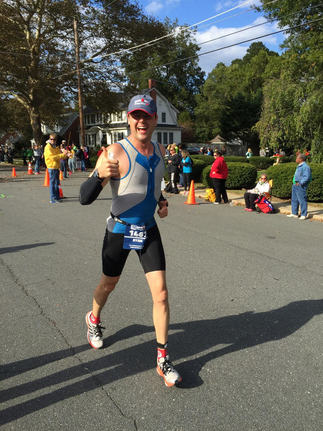 Ryan Frei in his own words:

I used to watch the televised Ironman Kona race every year while growing up and would think to myself: “How is that possible?  How can a human do that?  I wonder if I could finish an Ironman one day?”  In 2015, I decided to take a decade of casual triathlon participation to the next level and registered to race Ironman Maryland. Becoming an “Ironman” was always more like a pipe dream for me, even after I started doing sprint- and Olympic-distance triathlons in my early 20s.  By my late 20s, I did my first half-Ironman and remember limping at one point during the run after my hamstring cramped up.  I wondered if it was a sign that doubling that distance might not be in the cards for me.  I still told myself that I wanted to do a full Ironman one day but found myself pushing snooze on that ambition every year.
And then I turned 35.  My wife and I were expecting our first child, I was busier than ever before practicing as a litigation attorney, and it dawned on me that I was going to have less and less free time with each passing year.  My wife’s support was a huge mental boost for me, but I knew I needed training structure and expertise to help me on my journey.  So, on a friend’s recommendation, I contacted Ed Boyle.
From our first meeting over coffee, I knew Ed was the right coach for me.  He didn’t give me a canned speech or a training schedule template.  Instead, he asked about my goals, my experience with the sport of triathlon, my perceived strengths and weaknesses, my racing equipment and gear, my work schedule, and what I was trying to accomplish as an athlete, and as a person.
Over the next few months, Ed helped me however he could—from lining me up with training partners, to giving me swim lessons, to introducing me to new tools that made training easier.  Ed’s guidance fundamentally changed how I viewed triathlon training and racing.  Rather than focus on pace and times, he introduced me to concepts like nutrition, heart rate, cadence, power, equipment fit, form—and, most of all, patience.  Ed gave me the confidence to know that if I put in the time and followed his training program, everything else would fall into place.  He was absolutely right.  As my endurance increased over five months of training with Ed, I started raising the bar with my goals every few weeks.  There were some challenging times—including sleep deprivation after my daughter was born, and a major trial I had right in the middle of my training program—but Ed kept my trajectory steady and my motivation high.
On race day, I will never forget Ed making a surprise appearance in Maryland, yelling out, “Yeah, Ryan!!!!!!!” as I rode by the bike “special needs” station without any need to rest. When I crossed the finish line (running, not limping) and hugged my wife and daughter, I felt an incomparable sense of satisfaction and pride.  With Ed’s help, I not only became an Ironman, I beat my initial finish-time goal by two full hours.  And I met a great triathlon coach who became a great friend.
Proudly powered by Weebly